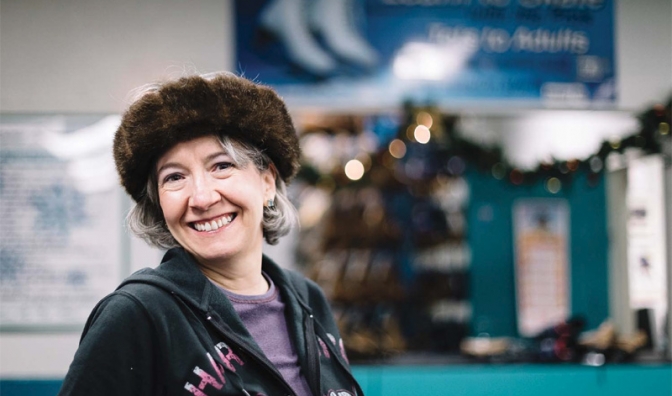 Lindsey Stirling’s Take Flight blared around the rink. Blades scraped against ice. Through it all, Coach Amy Henderson’s voice reverberated.

“Get on the circle! Pay attention. Come on! In a circle! Turn! Get on the same feet! You gotta be on time.”

The last time Adventure Chick hit the ice, I literally hit the ice. With my chin.

So, why not do it again? It started with an email from my friend Josette Plank. She helps support synchronized skating in the area. Would I give it a try?

Sure, but synchronized skating? I’d heard of synchronized swimming, but never synchro skating. So, on a Sunday evening, photographer Kelly Ann Shuler and I met Plank at Twin Ponds East. It had been so long since I put on figure skates – there was that little incident with my sisters convincing me to go, and the resulting hematoma – that Plank had to provide tips on strapping up.

“Lace them up snugly around your ankles, but not too tight,” she said.

Ah, but tight is good. About to step onto the rink, I blanched, fearful of my wobbly ankles. But just like bicycling, it all comes back to you. There are stutter steps, a few tentative glides and then a “this isn’t so bad” moment.

Of course, the others on the ice were teenage girls who have been skating almost as long as they’ve been walking. This was Team Reflections. Synchro skating levels range from children to adults. As with any synchronized sport, the goal is getting multiple people to move in precision while they create formations on the ice. They might create circles or link like hubs in a wheel. They form block shapes or lines. They intersect.

At the highest levels of competition, synchro skaters perform lifts and spins, all while speeding around the ice to music. Still, I would come to learn that synchro skating doesn’t always feel the love from the competitive skating community. Is it really a sport?

All I know is that I saw young athletes who train regularly on the ice and in the gym. They employ balance, endurance, skill, competitive fire and teamwork.

That word – teamwork – came up constantly. For many, synchro bridges the isolation of solo skating to the camaraderie of team competition.

“A lot of skaters maybe don’t have the time, money or ability to work on jumping,” said Janice Reinke, a team coach who also synchro skates on an adult team. “This gives them the chance to work as a team and work on their individual skills as well. They like skating with their friends and traveling and competing together.”

In fact, synchro skating is growing. Colleges have teams. Many synchro skaters find work on ice shows. There are U.S. and world championships. There are not, however, Olympics competitions.

But isn’t synchronized swimming in the Olympics? Yes, but the votes keep falling short. Something to do with housing all those teams. Still, synchro advocates hope the next vote will open the door to the 2022 Olympics.

At this practice, Team Reflections was preparing for a competition in Lowell, Mass., just days away, but there was a hitch. With a team member injured, Coach Henderson had to reshuffle her skaters. Naturally, that required adjustments to timing and pace.

“You learn, when you skate next to somebody for a while, how they slow down, where you need to pick up, where they lay off,” said Coach Henderson as the skaters made formations in front of us. Just then, two lines blended into one. “Now we’re getting a little bit better here.”

On the sidelines, team member Abby Lawrence – she was the injured skater – told me she was a solo skater who first saw synchro at a competition and “thought it looked really cool.” Team members practice “over and over again” to achieve harmony. They bond outside the rink with campfires and movie parties.

“We’re all there for each other and try to be the best we can be together,” Lawrence said. “We’re all as good as the worst skater.”

Which I was about to learn for myself.

“You ready?” Coach Henderson asked me.

If they’re all as good as the worst skater, they were about to really stink. The team lined up at the far end of the rink, and Coach Henderson placed me between two skaters in the middle. We linked arms, Coach Henderson instructing me to get a lobster grip on the shoulders of my line mates, two skaters named Natalie Bygall and Natalea Andersen.

“We’re going to just go left, right, left, right all the way down,” said Coach Henderson. “You guys keep her up, OK?”

That’s right – if I go down, the whole line goes with me.

I stepped forward with the team. Miraculously, I remembered left from right – this has been known to be a problem – and we were gliding the length of the rink.

I apologized to Bygall and Andersen for the bruises I was probably lobster-clawing into their shoulders.

“Turn your head, Diane,” Coach Henderson instructed from the side. “Whichever foot you’re on, turn your head that way.”

I was synchronizing with a line of skaters! It was like Disney on Ice! Except that Disney on Ice skaters are, you know, good on skates.

I asked, what’s the hardest part about getting in synch?

“Staying in synch,” someone said.

After the Lowell competition, the team prepares for its big fundraiser – the Team Reflections Synchro Invitational, the East Coast’s second-largest, non-qualifying competition. In its eighth year, the Feb. 15 event at GIANT Center will attract a record 106 teams, from as far away as Texas.

Why a fundraiser, by the way? Club President Rebecca Hilgers figured this sport costs about $2,000 a year for the average family and oh-so-much-more for the high-level skaters. But the parents waiting in the Twin Ponds East lobby didn’t mention the financial sacrifice when I talked to them after stumbling my way off the ice.

“The girls can be part of a team sport and do something they love,” said Tom Andersen of Carlisle, father of Natalea (aka “Alaska,” since that’s where she came from). “They gain friendships. There’s teamwork. It’s huge. They’ve grown a lot over the last three years. Fortunately, we’ve been able to be a part of it.”

This article appears in the February 2016 issue of Harrisburg Magazine

You did an awesome job, Diane! And kudos to you for wearing noggin protection (Diane's fancy fur hat is really an Ice Halo, a gorgeously disguised skull protector.) Thanks for skating with us, and any time you want to join the adult synchro team, let us know!

Blessed by the Holy Potato

Diary of a Concussion - A Worthy Read

T'Was the month before Christmas