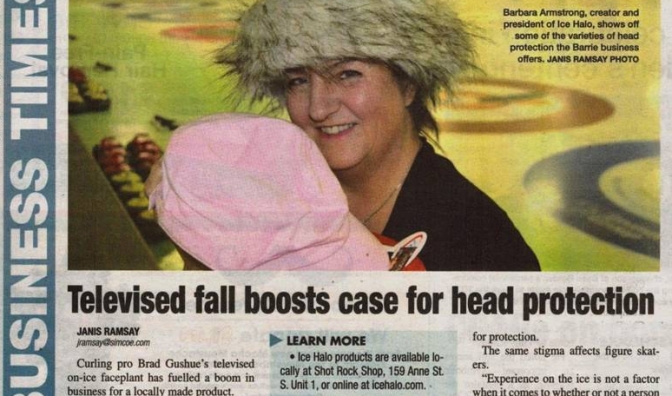 Curling pro Brad Gushue's televised on-ice faceplant has fuelled a boom in business for a locally made product.

She created the product, which protects curlers' heads, eight years ago after suffering a concussin when she fell at the Barrie Curling Club her first time out.

"The damage is real. It's serious and I hate to see it happen to children or anyone else," Armstrong said. "I know you never feel the same and if (Gushue) can do it, I can do it, too."

Armstrong has long believed protective headwear should be mandatory on the ice. However, she was disappointed to learn fans don't want curling pros' fases to be obstructed by helmets.

"No one has made it mandatory," Armstrong said. "We are trying to start that"

She notes many sakting arenas insist that protective  headwear must be worn on the ice, however that's not always the case at curling rinks.

This article was printed in several Simcoe County newspapers.

The Ice Halo products can be purchased online or through almost 200 retailers around the world.

When Armstrong first made an Ice Halo for herself, she had no intention of ding it for a livign , but soon found the demand was there.

The original product was a thick band worn around her browline and head, but in the past few years, she's listened to customers' requests and now makes toques, ball caps and is about to launch a soft helmet.

"It's a fashion aspect. People don't want to have anythign on their head," she said.

And convincing adult curlers to wear a helmet can be challenging, even though the younger curlers must wear helmets for protection.

"Experience on the ice is not a factor when it comes to whether or not a person will slip and fall," Armstrong said.

Her solution lies in getting younger skaters and curlers to wear a Halo or Helmet and hopes acceptance will follow as they grow.

"Eventually, I'd like to see people wearing head protection because it's acceptable."

Ice Halos are made inBarrie with vinyl nitrile foam - the same material found inside a hockey helmet.

From toddlers playing in playgrounds to seniors who are prone to falling, Armstrong said there shouldn't be shame to wearing a helmet or an Ice Halo in public or around the home.

"Anyone is at risk for getting hurt. Anyone who is smart wears a hat in the winter, why not wear a helmet or Halo for protection?"

Hot Off The Press