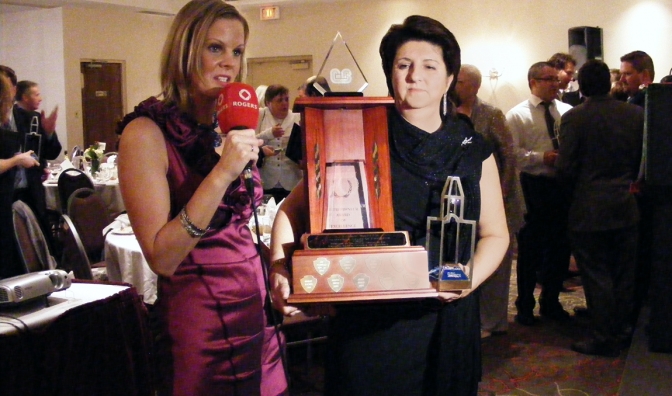 Initiated by the Greater Barrie Chamber of Commerce and the City of Barrie in 2003, the Barrie Business Awards program recognizes the contribution of local businesses to the continued growth and success of our community.

Each year the program begins with a call for nominations in the spring, nominees are interviewed throughout the summer, the panel of judges meets at the end of summer, and finalists are announced in early fall.

The awards are presented in November, during a gala that has come to be known as Barrie's premier business networking black tie event. The list of previous award recipients and finalists is impressive; Barrie residents should be proud to have such diverse and compassionate businesses within their community.

In November of 2012 Ice Halo Ltd. won the OLG Retail Business Excellence Award and Barbara, the President and creator of the Ice Halo won the Arch Brown Entrepeneur Award of Excellence - a very prestigeous award.

Blessed by the Holy Potato

Diary of a Concussion - A Worthy Read

T'Was the month before Christmas